Posted on August 5, 2015 by katedalexander

As I write this I’m back in McMurdo, on my way back to the United States. I may be here for a few days, as flights are running slow due to weather and the holidays, but it feels good to have started my journey home. After over a month on the Ice, I’m ready to get back.

The weather here is much nicer than it was on my last visit, allowing for a proper view of Mount Erebus (the world’s southernmost active volcano). As seen from the air field.

My last few days at Pole were a mix of work and last-minute sightseeing. On the day after Christmas I finally got a chance to see the ice tunnels under the station, which I had wanted to visit for weeks. The tunnels are cut to carry pipes that bring water to the station and waste back out. The station’s fresh water comes from an extraction site deep underground, where heat from the station’s waste is used to melt the ice. One of the carpenters who works in the tunnels gave me a tour. His job is to cut blocks of ice out of the tunnel walls with a chainsaw and remove them, to widen the tunnels and prevent them from collapsing inwards. (Due to the pressure of the snow and ice overhead, the tunnels are slowly bowing inwards and would eventually crush the pipes if left unchecked.) It’s one of the coldest jobs on station – the temperature in the ice tunnels is a fairly constant -55F. Fortunately there is no wind, which helps. In fact, the air is so still that in some places beautiful ice crystals extend from the ceiling and walls. They are so delicate that breathing on them causes them to fall.

Top: A typical view down the ice tunnels, with pipes carrying fresh water to the station and liquid waste away. Bottom: In some spots, the perfectly still air allows delicate ice crystals to form on the ceiling.

The tunnels are also an interesting display of station culture over the years – here and there the carpenters and other visitors have carved niches out of the walls, which house a variety of “shrines” ranging from artistic to serious to downright weird. Some are memorials to people on station who passed away, while others celebrate a specific winter or a random artifact. 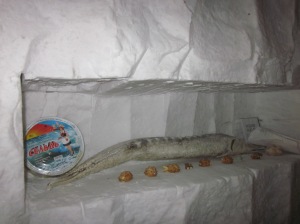 Top: Shrine containing the last tub of vanilla ice cream from winter 2012 (placed by the 2012 winterover crew). Bottom: A shrine with a seafood/Russian nautical theme.

After seeing the ice tunnels, I went out to the traverse open house. This second traverse of the season (SPoT2) was similar to the first one (SPoT1), which I saw around Thanksgiving, but they had a slightly different setup. Notably, they had four people per bedroom instead of two and a slightly smaller team. The SPoT1 team is preparing to head back to Pole from McMurdo, which will be the first time the South Pole has received three traverses in a single season. SPoT2 plan to do some trail improvement work on their way back to the coast, to make sure that the trip goes smoothly and quickly for SPoT1. No one wants the traverse team to get stuck on the ice cap with winter coming on. 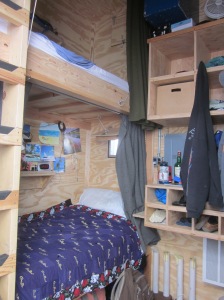 Top: The all-important tractors that haul the traverse crew and supplies hundreds of miles inland from McMurdo. Middle: Several traverse modules, still hitched together. Bottom: Inside one of the crew’s two bunk rooms.

The next day, Saturday, was the day that I was supposed to fly back to McMurdo, but a mechanical problem canceled the flight and I ended up staying until Monday. I spent most of my extra time at Pole helping to design and build a safety net for the new BICEP3 groundshield. Unlike the previous groundshield, the new one was built with a two-foot wide gap between the bottom and the roof, to allow it to tip sideways to perform calibration measurements. The net was designed to prevent anyone from slipping and falling through the gap while working on the roof. I worked on this project with Sam, who will be spending a full winter at the South Pole to take care of BICEP3 during its first season. By the time I left, we had completed the net and installed almost all of the sections. 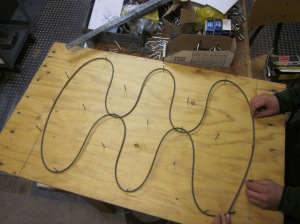 From top to bottom: Spacing out the net for construction, wire cutting in the machine shop, net installation on the roof of DSL, the finished product.

On my last morning at Pole I also helped remove a flammables cabinet from the old VIPER control room. It is completely covered in snow after a decade of abandonment, but there are still many useful supplies to be scavenged. (Sam and I also got the wire cable we used for our net from VIPER.) The stairs down to the entrance were completely covered in snow, so Rachel and I were able to slide the heavy metal cabinet up the slope, rather than having to lift it. The VIPER building and groundshield are scheduled to be taken down later this summer, leaving MAPO entirely on its own. (The two buildings were originally connected, but this passage has already been removed.) 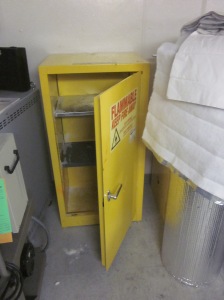 Top: The old VIPER groundshield and control room, completely buried in snow. Bottom: The rescued flammables cabinet in its new home in DSL.

After a final lunch my plane arrived, and the rest of the team came out to welcome the new arrivals and say goodbye to me and the three other team members who were leaving. One of the new arrivals was Bryan – and with him came the long-awaited Keck focal planes! Everyone was thrilled that they had arrived safely and Kirit carried the focal plane case straight out to MAPO, to get to work installing them. I was a little sad not to be able to stay to help, but I know that Kirit, Grant, Abby, and the rest of the team will do a great job. As the plane took off, I felt excited to be heading north again.

This entry was posted in Uncategorized. Bookmark the permalink.